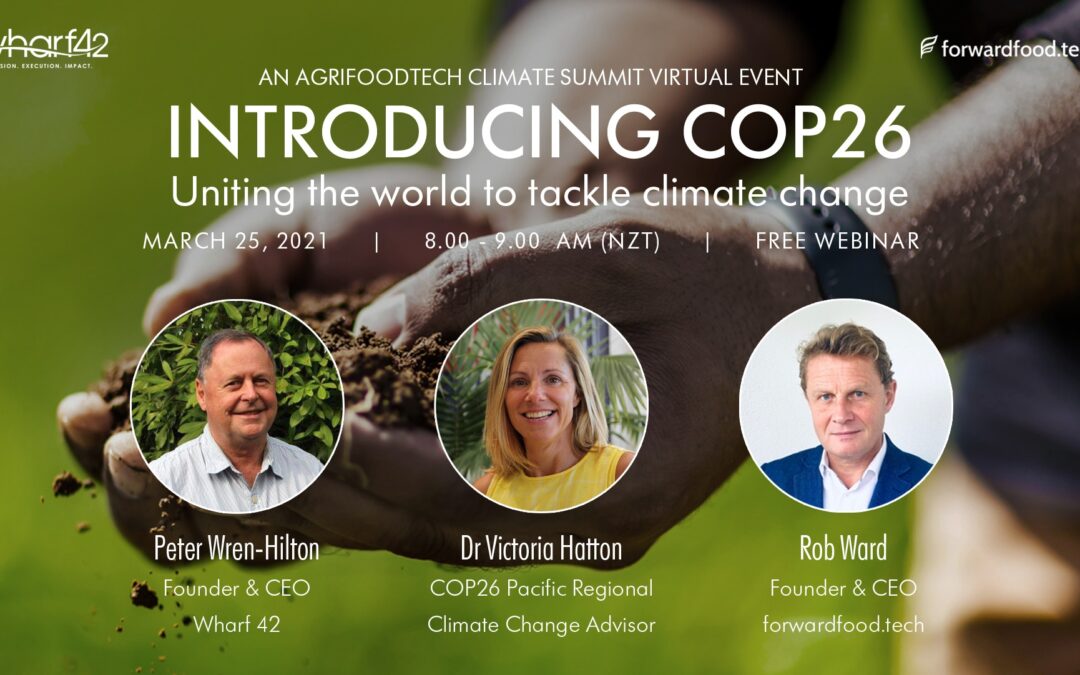 Have you registered for the first AgriFoodTech Climate Summit virtual event?

The event takes place tomorrow. To secure your free seat, please register below:

The AgriFoodTech Climate Summit Virtual Event Series will feature international thought leaders in the AgriFoodTech, Environmental, Sustainability, and Climate space, as they discuss the opportunities being developed by this ambitious global initiative to reduce greenhouse gas emissions.

This first virtual event is designed to introduce the background and purpose of the AgriFoodTech Climate Summit, together with an introduction to COP26 and the significance of the meetings taking place in Glasgow in November.

The three speakers taking part in this first virtual event are:

Registration for this virtual event is free of charge.

The virtual event will take place on; 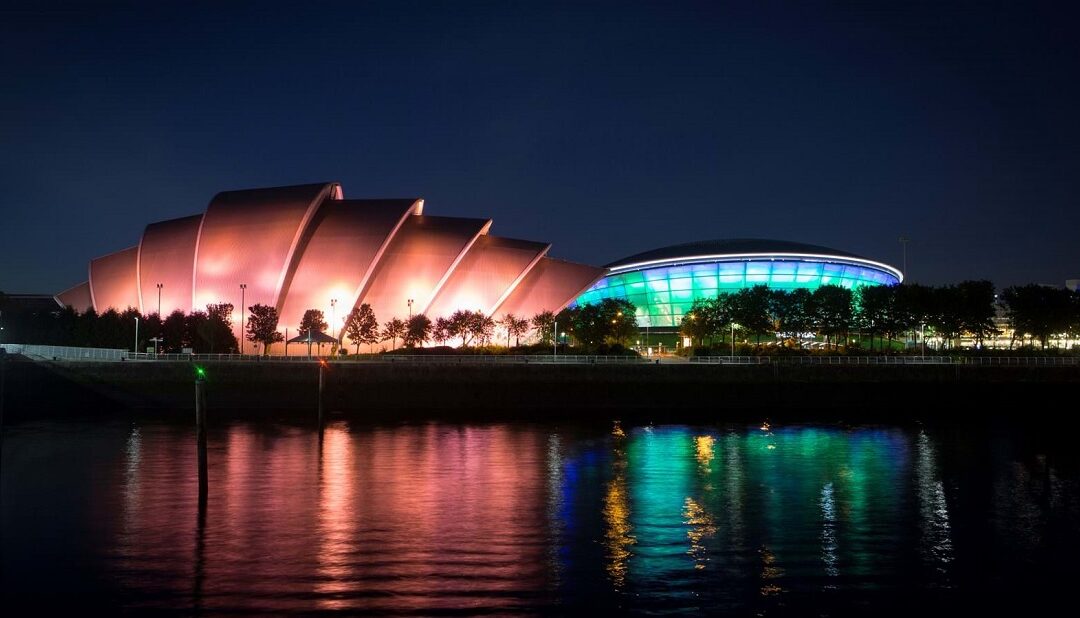 TAURANGA, 2 MARCH 2021: Wharf42, the New Zealand-based global AgriFoodTech consultancy, today formerly announced that it has partnered with UK-headquartered, ForwardFood.Tech, to co-host the AgriFoodTech Climate Summit at COP26 in Glasgow, on Saturday 6 November, 2021.

The AgriFoodTech Climate Summit is part of an ambitious international initiative to enable key global stakeholders to connect and engage in programmes designed to reduce greenhouse gas emissions. As the demand for more nutritious food and fibre grows, so does the pressure on the world’s increasingly vulnerable natural resources.

Wharf42 founder, Peter Wren-Hilton, comments; “It is our belief that only through the collaborative action taken by governments, major agribusinesses, researchers, startups and investors on a global scale, can we begin to collectively address the existential threat posed by climate change. If the farming and food industry is to fulfill the ambition for Net Zero Carbon, then only with this genuine collaboration internationally, can this be possible.

In order to support farmers and growers increase the production of nutritious food and fibre sustainably, which is affordable and accessible to all, COP26 provides the platform and opportunity to bring these key stakeholders together. Reducing greenhouse gas emissions through a comprehensive collaborative framework is the most effective solution available to address the challenge posed by climate change”.

ForwardsFood.Tech founder & CEO, Rob Ward explained; “We not only want to bring together all the key stakeholders in the farming and food industry, we also want to enable a completely new way of how established business, new businesses and researchers can interact together to address the global agrifood industry’s challenges. This ambitious approach is a fresh way to utilise the precious resources we have internationally”.

Rob Ward continued; “The platform being developed will have universal appeal to anyone, from any country, at any level. Genuinely innovative solutions will only work with total accessibility and delivered as a true meritocracy”. Two days ago, I posted an article to this blog entitled ‘Envisioning an APAC AgriFood Hub’.

Today, I’m delighted that one of the key building blocks to help make that happen has been signed off by both AgriTechNZ and AusAgritech. The MOU signed by both organisations provides the collaborative platform necessary for the trans-Tasman relationship to rapidly accelerate.

These are exciting times to be  engaged in agritech ‘down-under’!

Agritech New Zealand (AgriTechNZ) and The Australian Agritech Association (AusAgritech) are member organisations promoting technology development and adoption that seeks to revolutionise the value of the agricultural and food sectors. Both organisations share the same goals to promote and advocate for the opportunities and challenges across the AgriTech sector.

Today AusAgritech and AgriTechNZ signed a Memorandum of Understanding (MOU) to ignite support for the Agritech industry within Australia and New Zealand. The MOU has been designed to highlight the regional opportunities of a collaborative AgriTech hub in the trans-Tasman region.

The chairman of AusAgritech, Andrew Coppin, said “This is a wonderful development for Agritech in this region. The opportunities to work with and collaborate with our friends in New Zealand to deliver better outcomes for Farmers, more regional jobs and significant export opportunities for both countries is compelling. This MOU is a further extension and validation of the foundations laid by the Australia New Zealand Agritech Council throughout 2020.”

NZ Agritech Chair, Kenneth Irons, said “Agritech New Zealand is delighted to be formalising its relationship with its sister organisation across the Tasman. Both organisations share a common goal of accelerating the development of agricultural technologies that enable our farmers and growers to increase productivity and profitability, more sustainably.

He went on to say “By co-signing this Memorandum of Understanding, we can not only more successfully create better value for our two countries’ primary sectors, we can also more successfully promote Australasia to its rightful position as one of the truly great AgriTech regions of the world.”

The Australian Agritech Association will promote this activity to relevant Australian government agencies, major Australian agribusiness partners and its rapidly growing cohort of AgriTech members. Agritech New Zealand will seek to extend the opportunity of preparing a more formal partnership between the Western Growers Innovation & Technology Center and the nascent AgriTech ecosystem being developed in New Zealand. The purpose of the call is to learn more about the upcoming Land & Launch programme, being hosted by GROW, which is designed to connect UK agrifood startups into the Singapore and wider ASEAN market.

A quick 4 point summary of the programme reads as follows:

As I’ve indicated in previous posts, I’ve been working closely with the team at GROW for some time. Building new channels to market for New Zealand agritech companies has been a core focus of mine whilst we stay locked behind closed borders.

Wearing some of my different current hats; Head of Global Alliances at Agritech New Zealand, Senior Adviser to the Australian Agritech Association and an external adviser to the nascent AgriFood Tech Singapore Association, has provided me with an insight into some of the opportunities that a pan-APAC AgriFood Hub could offer. New Zealand, Australia and Singapore all enjoy strong bilateral relations. The question is; can we triangulate this to address two of the major challenges of our time – sustainable food production and food safety? I believe we can. It’s a question that I will be asking as I connect with colleagues in both Singapore and the UK later tonight.

Given the time zones between the UK & Singapore, tonight’s call starts at 10.00pm. Time then for a milo and chocolate biscuit as we learn more about just how a Land & Launch programme might play out. As a potential template for Australia and New Zealand, it is going to be an interest model to discuss. 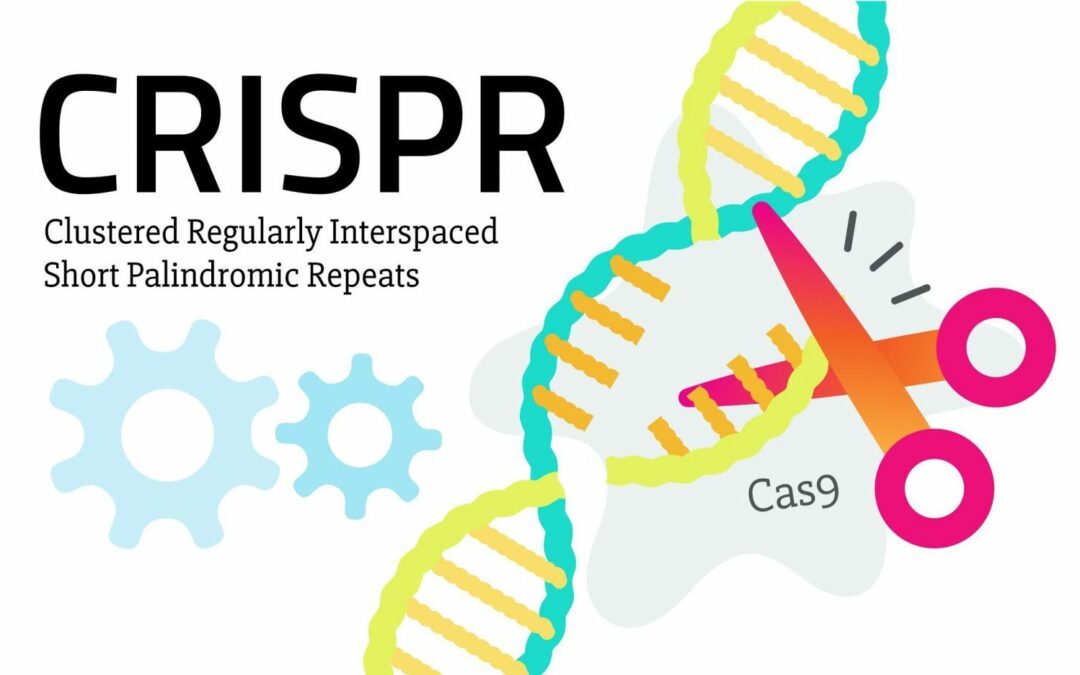 Yesterday Wharf42 published an Agriculture Impact Summary of the just released Climate Change Commission Draft Advice for Consultation. Today, we look at the Draft Advice more deeply with specific reference to the approach taken to the impact of future agri-technology deployment.

Whilst stating that agriculture has a large role to play in reducing emissions, the Draft Advice document also states; ‘In setting our path and emissions budget levels, we have conservatively assumed that no new technologies to reduce methane emissions from agriculture are available before 2035’.

Without the deployment of new technologies, the Draft Advice document believes that our agriculture sector can still meet most of the targets set to address the volume of emissions produced on the farm. ‘There are changes that farmers can make now to reduce emissions on their farms, if given sufficient support. These can improve animal performance while reducing stock numbers, reducing the number of breeding animals required, and moving to lower input farm systems. The Biological Emissions Reference Group found that, when successfully implemented, these changes could be made while not significantly reducing production and while maintaining or even improving profitability’.

The general tone of the Commission’s Draft Advice around the implementation of agri-technologies is in my view, conservative. It reflects in some ways, the current playing field that New Zealand researchers have to play in. They, and many agritech companies, are operating without access to the full tool-set.

This was partly addressed on Page 119 of the document, under a ‘Time Critical Necessary Actions’ header. Under the sub-heading, ‘Reduce biogenic agricultural emissions through on-farm efficiency and technologies’ appeared the recommendation;  ‘Review current arrangements and develop a long-term plan for targeted research and development of technologies (including evaluating the role of emerging technologies such as genetic engineering) and practices to reduce biogenic emissions from agriculture’.

In New Zealand, evaluating the role of emerging technologies such as genetic engineering is long overdue. Period. In short, it’s time to start talking about the ‘C’word, CRISPR.

CRISPR/Cas9 technology provides a great opportunity for biotechnologists to develop a sustainable and productive agricultural system by working on the improvement of crop yield, abiotic stress tolerance, increasing resistance to diseases and pests and improvement of the plant product by modifying the plants. A great example in New Zealand is the work of AgResearch and the development of a high lipid ryegrass which improves the healthy fats in milk and reduces greenhouse gas emissions. Except for the fact that CRISPR/Cas9 technology is deemed to be genetic engineering-based and therefore not allowed for use in New Zealand. Even though the evidence shows that the ryegrass reduces greenhouse gas emissions. Go figure.

The issue here is not the science or the technology. It’s the politics and the historic perception of GM. Think Monsanto. Think 1970s. The world however has moved on and there is undeniably strong evidence that CRISPR technology can deliver solutions well within the Climate Change Commission’s 2035 time-frame. It’s just that in New Zealand’s current political landscape, nobody dares say it.

I discussed the possibilities of embracing CRISPR R&D with a senior New Zealand Government Minister last year. In 2019, the discussion was brief and to the point. In 2020, the position had changed. It was now time for a ‘robust discussion’. In past discussions with Biotech NZ’s Executive Director, Zahra Champion, this is a conversation that is well overdue. For New Zealand farmers and growers alike, it’s a conversation that cannot start soon enough.

Over the past 12 months, New Zealanders have been regaled with the message that we ‘listen’ to and ‘act on’ science. The Climate Change Commission has recommended we formally evaluate the role of emerging technologies such as genetic engineering.

As someone well above my pay grade once said, ‘Let’s do it”.