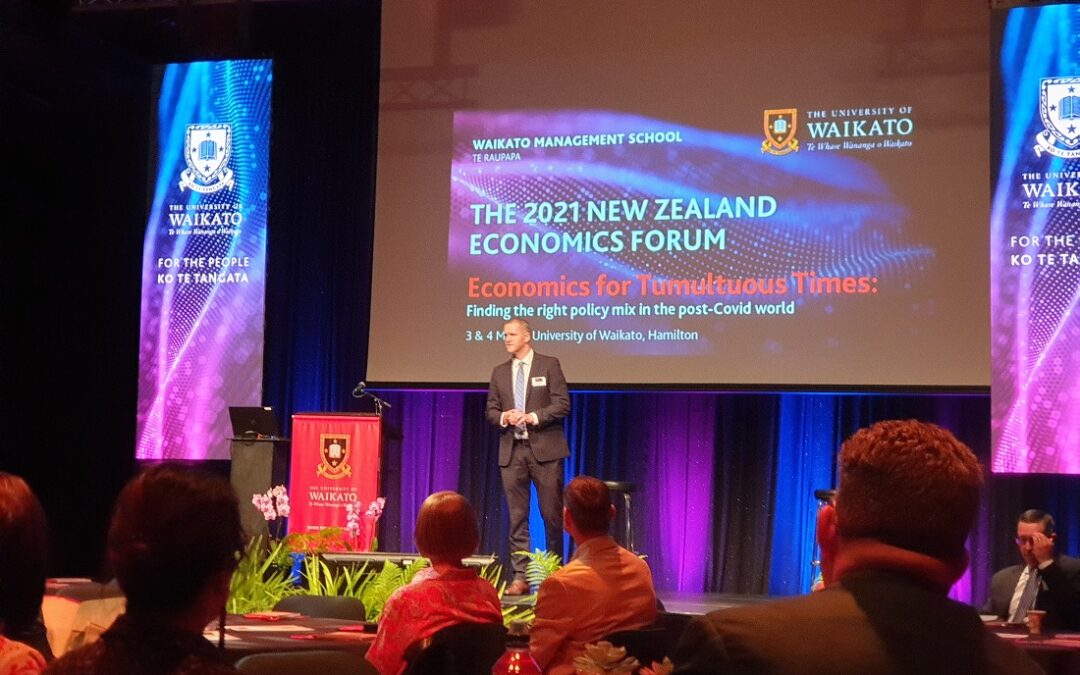 Yesterday, Jacqui and I had the opportunity to attend the 2021 New Zealand Economic Forum, hosted by the University of Waikato & Waikato Management School in Hamilton.

Having spent several months working on this week’s AgriFoodTech Climate Summit announcement, it was good to be able to focus on some of New Zealand’s post COVID-19 macro economic challenges as well as network in-person with a number of new and familiar faces.

The Forum attracted a number of highly experienced speakers. Among them;

The Forum’s subhead was ‘Finding the right policy mix in the post-Covid world’.

The subtext that emerged from the day’s event that most caught my attention however really took hold during the final panel discussion involving Crompton, Bagrie & Dalziel. They introduced a concept that in Wellington is known as the ‘Policy Authorising Environment’. This was new to me.

Essentially it means that Ministers and their senior officials, will often fail to support policies because they contain an element of risk. This has, in the view of the panel, led to a lack of public sector policy experimentation. Whilst the private sector has frequently been urged to take rapid and agile steps to address disruption by shareholders / investors, government by contrast has no such oversight and is therefore much more risk averse. Incremental change rather than transformation change is therefore often the preferred option. Given the Forum’s subhead, in a post-COVID world, will this approach be enough?

One interesting example given related to The Living Standards Framework which represents the Treasury’s perspective on what matters for New Zealanders’ wellbeing, now and into the future. Treasury considered the role of ‘innovation’, but deferred any inclusion of ‘innovation’ into its recommendations to a consultation process to be completed in 2022. One would frankly hope that innovation and growth would be at he heart of any productivity and wellbeing settings. The fact that Treasury deferred on this is I guess a good example of the ‘Policy Authorising Environment’ at work.

The discussion around ‘public policy settings’ came up a number of times during the day. A common held view was that there are not enough enabling frameworks being developed by the public sector. As New Zealand emerges into a post-Covid world, developing such frameworks should be a priority. Otherwise we might all just suffer from Cameron Bagrie’s quote of the day, From a government perspective, “failure is simply deferred achievement”.

The most anticipated session for me is the panel discussion on Economic Policy and the Environment – challenges and opportunities. Vicky Robertson, Chief Executive, Ministry of Environment is being joined by Matt Burgess, Senior Economist of the New Zealand Initiative and Dr Victoria Kahui from the University of Otago. Robertson sits on the new public sector Climate Change Chief Executive Board and co-chairs Aotearoa Circle. Whilst there was occasional reference to climate change and its long term impact by speakers yesterday, this is the one session where I expect the subject to dominate.

It comes as the government has announced an extension to the submission date for feedback on the Climate Change Commission’s Advisory to government. Wharf42 intends to submit a response to this call. In this spirit, I hope that today’s panel discussion focuses on the ‘walk’ and not just the ‘talk’.

The time for taking positive and real action has come.